Who Gets Fido In The Divorce? 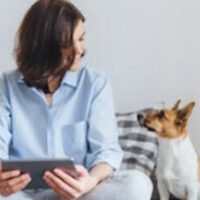 As you contemplate divorce, you realize that you really wouldn’t miss your spouse one bit were you to part ways. Unfortunately, there’s another matter that is tugging at your heartstrings:  the family pet.  That’s where your real attachment lies.  So if you go forward with the decision to end the marriage, what are your chances of keeping custody of your beloved pet here in Missouri?  The answer is unclear.

If you consider your pet part of the family, you are certainly not alone!  Disputes about them are on the rise in American divorce, according to a survey of divorce attorneys.  In fact, nearly 30 percent of lawyers who responded to questions by the American Academy of Matrimonial Lawyers (AAML) say that a great deal of the conflict involves two individuals who truly adore a pet. Additionally,  many individuals use the family pet as part of a strategy to gain the upper hand as property settlement discussions are underway.  It’s a nasty scheme, and one that frequently causes the perpetrator a lot of blowback when it becomes obvious they really have no affection for the pet. That being said, there are some interesting facts about pet custody issues:

Generally speaking, pets are considered property.  Since Missouri is an equitable distribution state, the letter of the law asks courts to address the pet with the same considerations it would with any other property: does it belong to one individual or to the couple, what is it worth, and so forth.  Sometimes the analysis must go a little deeper, and the courts will weigh the best interest of the pet in their evaluation. Would a large dog fare better in a house with a yard or in a one-bedroom apartment?  Are children part of the equation?  Should the pet go with them?  Does one individual seem to have a greater attachment to the pet than the other?  Is shared custody an option?

The Feelings are Real

One incident reported in Reuters shares the story of Joseph and Formosa, neither of whom could bear to part with their dog.  Joseph said life without the pup would be “the worst feeling in the world,” while Formosa said the thought of leaving the dog was “devastating.” The final outcome placed the dog with each of them for six months of the year, even though they lived in different states.

Is your pet a key issue in your divorce?  If so, you may need an attorney who’s willing to do some creative footwork on your behalf.  At Courtney & Mills, our Springfield divorce lawyers listen to clients and fight for the best possible outcomes every time.  Contact our office today for a confidential consultation.

By Courtney & Mills, LLC | Posted on July 30, 2021
« Incarceration And Divorce
Is Your Ex Failing To Adhere To The Parenting Plan? »