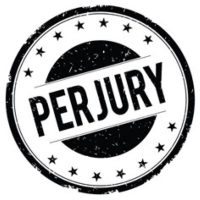 If you’ve been charged with perjury, you probably know you are in pretty hot water. Perjury is a serious felony charge, and if convicted, you will be facing some stiff penalties.  That’s why it is so important for you to have experienced, local legal counsel representing you going forward.

Witnesses in a courtroom trial take an oath to be truthful in their testimony.  The same is true when you have a document notarized; it is done so with the promise that the document is accurate.   Perjury occurs when trial witnesses deliberately lie about a fact that is material to the case. Most people are familiar with this definition from the many courtroom movies and tv shows out there.  But in addition to trials, perjury can occur during any testimony before any official during a legal proceeding, including a notary republic. To be clear, perjury may be a violation of both state and federal law. Affidavits and documents submitted to a court are accompanied by a signed declaration that the information provided is accurate under penalty of perjury under 28 U. S,. Code 1746.

There are many circumstances under which perjury may occur. That being said, it’s important to note that in the worst-case scenario, offenders could face up to a decade behind bars in addition to significant fines. So how can an accomplished criminal defense attorney fight back against these charges?

A good attorney will examine the evidence against you in order to develop the best possible defense.  Some strategies that might be considered include:

The Defense You Need

You deserve a skilled Springfield defense lawyer when it comes to perjury charges.  At Courtney & Mills, that is precisely what you will get.  Schedule a confidential consultation in our office today.

By Courtney & Mills, LLC | Posted on July 20, 2022
« Should You Consider A Post-Nuptial Agreement?
Skip footer and go back to main navigation